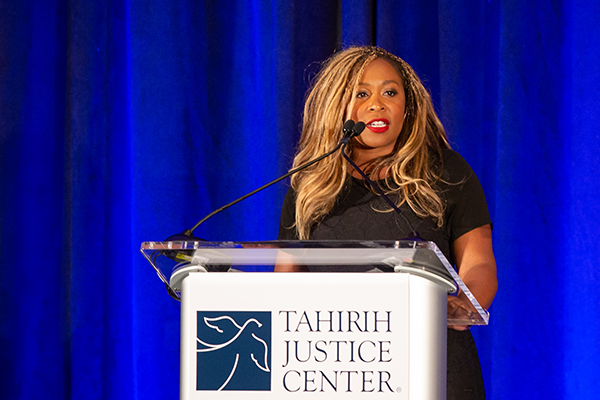 Supporters at Tahirih’s 21st Annual Gala were deeply inspired by the personal example of a bold and courageous woman who was unafraid to “break the silence” about sexual harassment and assault, Adama Iwu, the evening’s Keynote Speaker.

Kelly Tullier, who earlier that night was honored alongside her employer Visa Inc. with Tahirih’s Corporate Leadership Award, proudly welcomed Iwu to the stage, introducing her as a “change maker, a leader, and someone I greatly admire.” Iwu was featured on the cover of Time Magazine as a Person of the Year and a Silence Breaker for her efforts to mobilize over 140 women to publish an open letter in the Los Angeles Times highlighting the pervasive culture of sexual harassment and assault in politics. The letter struck a chord with women in politics and other industries, who reached out to share their stories – and to call for solutions. Iwu is one of the founders of the We Said Enough Foundation, whose mission is to eliminate bullying, harassment, and assault in all its forms. She now serves as the President of the Board.

In her impassioned speech, Iwu noted that “Right now, we are in the middle of a reckoning. We are having complex conversations about ensuring that victims of sexual violence, discrimination, and abuse are believed while also dealing with questions of how we, a nation of immigrants, treat the immigrants among us. It’s important to stand with victims of sexual abuse and support the #metoo movement, but it’s also critical to ensure that immigrant women and young women and girls who have endured the same treatment are not silenced and marginalized because of poverty, immigration status, or language barriers. And at the highest level, we must recognize that the battle is one in the same – the fight to protect marginalized humans. To protect women is to protect all women, all children. Under all circumstances. No matter her status, size, language, sexual orientation, ethnicity, age or education, all women are worthy of protections. All women are worthy of being treated as fully human. A woman’s humanness is far more important that her immigration status.”

Iwu knows all too well the burden so many women are forced to bear. In harnessing her courage to tell her own story of sexual harassment, she simultaneously committed to raising the volume of many other brave voices. Her example has become iconic, giving survivors strength to share their stories and make their voices heard. However, she aptly noted how immigration status intensifies the barriers women face in speaking out about harassment and violence, or accessing protection from it.

As Iwu so audaciously said, “So while we have everyone’s attention, I for one do not intend to let this moment pass us by without real change. A forever change. As a nation we must do better, and we must hold our elected officials to higher standards, particularly on issues that disproportionately affect young girls and women. Did you know that right now, in over 20 states there is no minimum marriage age? Between 2000 and 2015, over 200,000  children were married in the U.S. Tahirih has been working state by state to change antiquated laws that keep child marriage legal. Just this week in Delaware, a bill was signed into law that sets the minimum marriage age at 18, with no exceptions. In March, Kentucky –which previously had some of the most lax laws in the country –passed SB 48, which completely overhauled their child marriage laws and put into place critical protections against forced marriage and other harm. Florida also passed similar legislation this year. But the work is ongoing and your support is critical. As we continue to press for change, it is incumbent on us, who have the opportunity and the means, to protect those who don’t.”

Iwu’s call to action was loud and clear. The time is now. Progress is already being made. Change is happening, and the momentum must not cease. We must continue to use the tools at our disposal to advance the transformation of the world as we know it, to usher in the world we know is possible, and can now not just be envisioned, but seen in the not too distant future.

“This opportunity for true and lasting change exists right now…So to the powerful women and the amazing men who are here tonight, thank you. This is up to all of us. So do not grow weary in your well doing. Keep supporting Tahirih and those doing good work. Keep fighting back, keep telling your stories. Keep shining a light.”